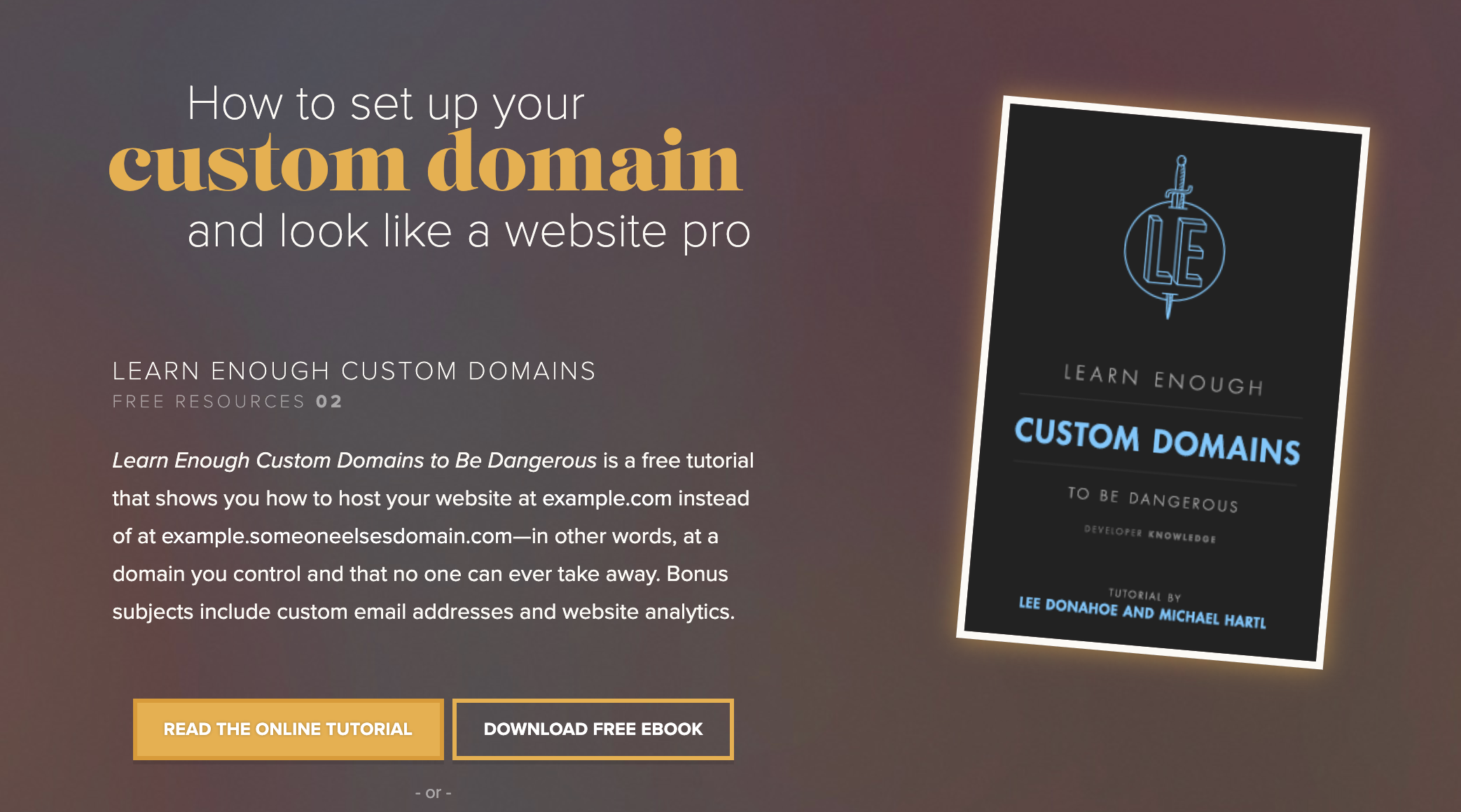 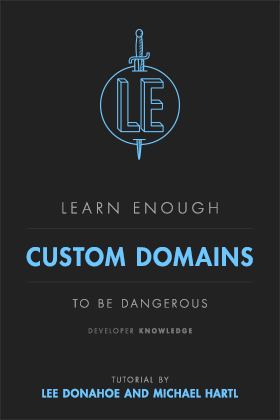 I’m pleased to announce the availability of a new free Learn Enough tutorial: Learn Enough Custom Domains to Be Dangerous, by me and Learn Enough cofounder Lee Donahoe (but mostly by Lee).

Learn Enough Custom Domains to Be Dangerous is available for free online and as a free downloadable ebook (EPUB/MOBI/PDF, 129 pages).

Learn Enough Custom Domains is a great complement to the full set of Learn Enough tutorials, available by subscription to the Learn Enough All Access Bundle. (In case cost is a factor, scholarships are also available.)

To get an idea of what the tutorial covers, there’s no better place to start than the beginning of the book itself:

So, you want to make a custom website? Or perhaps you already have one? This tutorial is designed for everyone who’d rather have their website live at example.com than at example.someoneelsesdomain.com—in other words, at a domain you control and that no one can ever take away. As a bonus: your email address can be [email protected] instead of [email protected]

If you’re not sure how to build a real website, we’ve got you covered there, too: an especially good time to read this tutorial is after you’ve put together and deployed your first live site on the Internet while following the Learn Enough tutorial series—especially the Learn Enough tutorials on CSS & Layout, JavaScript, and Ruby, as well as the Ruby on Rails Tutorial.

Finally, this tutorial is designed as a general reference for custom domains, useful even for experienced web professionals. Configuring a website to use a custom domain is generally quite complicated—and every time you need to buy and configure a new domain you’ll find yourself following these same steps… which ends up happening for basically every project. This is why we decided it would probably be a good idea to put all that information into a living single document (which we’ll update and expand over time), instead of having the content spread out in small sections over a number of tutorials.

We previously published a draft of Learn Enough Custom Domains to Be Dangerous, especially asking for typos and bug reports. We got a few such reports (thanks!) and incorporated them into the text, but the best response we got came from reader Thomas Osborn. Thomas noted that he “Couldn’t find any typos but I did want to say a few things”:

Thanks, Thomas! We’re glad you found the tutorial useful.

We’re really excited about Learn Enough Custom Domains to Be Dangerous, which we think fills in an important gap in the standard set of Web documentation. It pairs especially well with Learn Enough Dev Environment to Be Dangerous; together, the two tutorials serve as free community resources for often-neglected but essential technical subjects.

We hope you enjoy it!